I just wanted to let you know that I have switched over to TUMBLR. You can find my new blog by clicking HERE.

Hope to see ya around!
Posted by Crissi at 10:00 PM No comments:

Stomping on the Little Guy...

Hello Everyone,
Allow me to introduce myself. My name is Cristina, and I run Book Club on facebook. Most of you know me as the Admin for three other pages.
In early 2009 I read a series of books called The Mortal Instruments by Cassandra Clare. In November of that year, I was lucky enough to meet Cassie when she came to Toronto. At that signing I asked her for her permission to create Official Facebook Pages for her work so that I might be able to share her Series with everyone. She gladly said I could, and so I did, making myself and Cassandra Clare rightful Admins.

I would like to inform those of you who do not know that I am not paid to do any of this. I have held numerous contests/giveaways where the prizes I have put up came out of my own pocket. Viviane Hebel,  who designs the Mortal Instruments and Infernal Devices jewelry,  can vouch for me on this. I do it purely because I love Cassie's work and I think Cassie is an amazing person and deserve everything she could ever want.

In early 2011 I was approached by a man who claimed to work for the publishing company for Simon & Schuster. He told me he was in charge of creating the Mortal Instruments page on Facebook. He saw my Page asked me to let them have admin rights as my page was already well established.

I refused him stating that I thought it would be unfair that he would have claim to all the work I put into the page and I would lose my admin rights. (I do not have proof of this conversation as I delete the post, but it was read by an outside party who can verify my statement is true.)
I was then approached by a lady by the name of Rachel Kory, on April 9, 2012 who claimed to be an admin of the Simon & Schuster Facebook page We had this conversation: 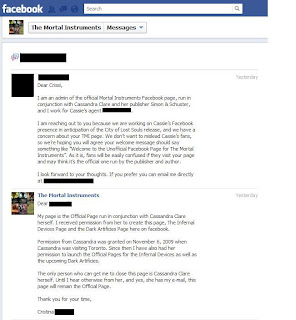 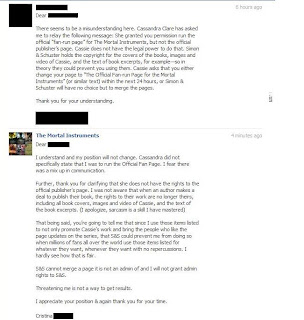 The purpose of Facebook page is to bring the members of Facebook who like that topic together in a community to discuss that topic and share thoughts and opinions. I have done so by gathering all the information you post out there on the web (Facebook, tmblr, Twitter, official webpages) and putting them in one convenient location. I have committed no copyright infringement.  I have not stated that the information on the page is mine nor that I own any of the material posted. I just posted pictures and information which other fans have done. But if what Rachel said is true, then Simon & Schuster have to approach every other fan page on Facebook and the internet for the Mortal Instruments who do not have permission to use the photos, images, words ect...and tell them the same thing. Otherwise I am unjustly being singled out for what all of the other fans have done.
I have contacted Cassandra who confirmed that she does not have the copyrights to the series, Simon & Schuster owns them.  Cassandra further stated that she has had no knowledge of the conversation between Rachel and myself, which would stipulate that what Rachel had told me (Cassie wants me to relay the following message...) was a lie. Cassandra has put in a phone call to the head of online at Simon and Schuster and would let me know the upshot. Sadly the page was merged before Cassie hear back from them.
As It is now April 11, 2012 at 4:30pm EST and my Mortal Instruments Facebook Page has been merged with the one from Simon & Schuster and no longer exists. Three years of work has been erased. I still have the Official Infernal Devices Page on Facebook and the Official Dark Artifices Facebook Page, though I do not know for how much longer.
I wanted all of you to know why my page is no longer there and that it is out of my hands.
Should you wish to stay in contact with me I have this blog here with Twitter and Facebook links posted at the top of the page on the left hand side.
All the Best.
Crissi

~UPDATE~
As of 10:30pm EST on April 11, 2012, The Simon and Schuster's Mortal Instruments Page temporary disabled fans from posting on the wall so they could delete the 20+ comments (which held Simon and Schuster in a negative light) they received about this situation.


~UPDATE~
As of 11:30pm EST on April 12, 2012 Cassandra Clare and I have agreed that while I am unable to change the ULR for the Facebook pages The Infernal Devices and The Dark Artifices, I did change the welcome message to Official Fan Page.


~UPDATE~
As of April 21, 2012 I have created a new page to replace the one taken from me. You can find it here: https://www.facebook.com/theofficialmortalinstruments